Astley Vineyard is in an idyllic location, approached through our own wooded valley, and backing on to open fields and ancient woodlands, barely a mile from the river Severn. It is no wonder that the place abounds with wildlife of all shapes and sizes. And this is one of the main reasons that our family chose to settle here: we love nature, the landscape, the birdies, the ever-changing sights and sounds of the seasons in our wonderfully varied and unpredictable climate.

With this blog, we hope to be able to share with you some of the natural events happening on our doorstep, introduce you to some of the wildlife “characters” who live with us, and hopefully get you to feel our passion and love for our little piece of paradise.

We moved in in July 2017, but were far too busy setting up the business, learning to drive tractors, growing and harvesting grapes, and selling wine to spend any time at all on anything else!

This is already proving to be a harsh winter. We’ve had two snowfalls. One, a biggie. But while we had about a foot of lying snow (as well as making snowmen and going sledging), we had a very exciting event. Sitting in our kitchen one morning, we noticed a flurry of fur and fuss right outside on the patio. A stoat was taking a rat, which was about the same size. And then another stoat joined in. And after they’d dragged off the body, they spent about 20 minutes “playing” in the snow. It probably wasn’t play, but it certainly kept us very entertained. What a treat!

But the most demanding, noisy, and marvellous bird at our kitchen window is Tarquin – a male pheasant, accompanied by his harem of no less than 6 females. They have learnt our mealtimes, and to present themselves for hand feeding at every opportunity. Tarquin is also a very effective (though not always welcome) alarm clock!

This is the time for us to tackle our woodland work. Mainly the responsibility of Daisy, Tim and Matleena, our woodland valley is split into two distinct areas: a 30 year old, mixed deciduous wood (called Janet’s Wood after the previous owner’s wife who did most of the planting) and a wilder, less accessible area with older trees (called The Dingle). A stream runs through both areas, and both areas are framed by splendid, very mature oak trees. In total the woodland is about 4 acres. A lot to take on, so it’s a good job there are three of us.

We joined the Small Woods Association and picked up many useful tips about woodland management (including the very important principles that a managed woodland is better than a neglected one, and that management involves cutting some trees down, to improve the biodiversity of the wood and to encourage vigour and growth). Tim passed on his chainsaw knowledge to Daisy and Matleena. We tooled up with bill hooks, loppers, ropes, helmets and wrapped up warm. And then we set about thinning. This involves taking out dead, diseased and crowded trees to open up the canopy and to let light into the woodland floor (which will encourage ground cover plants to grow in time). Arduous work, we are aiming to take out about 25% of all trees. And they are big! And on slopes! And it’s very muddy! But we’re having a great time, working as a team in the beautiful woods. It’s not quiet very often, with the chainsaws going, but it is very tranquil when we stop!

Up in the vineyard for most of last month and this, the pruning team of Tim, Bev and Matleena have been out in all weathers (except the very wet, which is not good for pruning as it spreads disease). Unlike the woodland work, however, this is tranquil and can be almost like meditation. Especially on the beautiful clear, crisp sunny winters’ mornings when the only sounds you can hear are the gentle whir of the pruners and the crying of the buzzards or the twittering of the skylarks overhead. Both birds are special, both seem to prefer the clear skies, and both mark their territories by calling from great height. But there are few sights so marvellous as two or three buzzards spiralling in the thermal air currents, calling to each other. And when this happens directly overhead, it’s very difficult not to down tools and just stare and dream.

Tree felling is great, but it comes with some challenges. Not the least of which is: what to do with the timber? Something relatively modest-looking, 30 feet in the air, becomes an absolute monster when it is on the ground. And we’ve so far felled about 30 of them. We’ve separated the twiggy bits (“brash” in the trade), the medium sized bits (poles) and the big stuff (logs) and stored them in piles in the wood waiting for the ground to be dry enough for us to remove them. But it seems like we’re going to have to move into carpentry in a big way to use all of this timber. Or have an apocalyptically large bonfire. Hmmm. Thoughts? 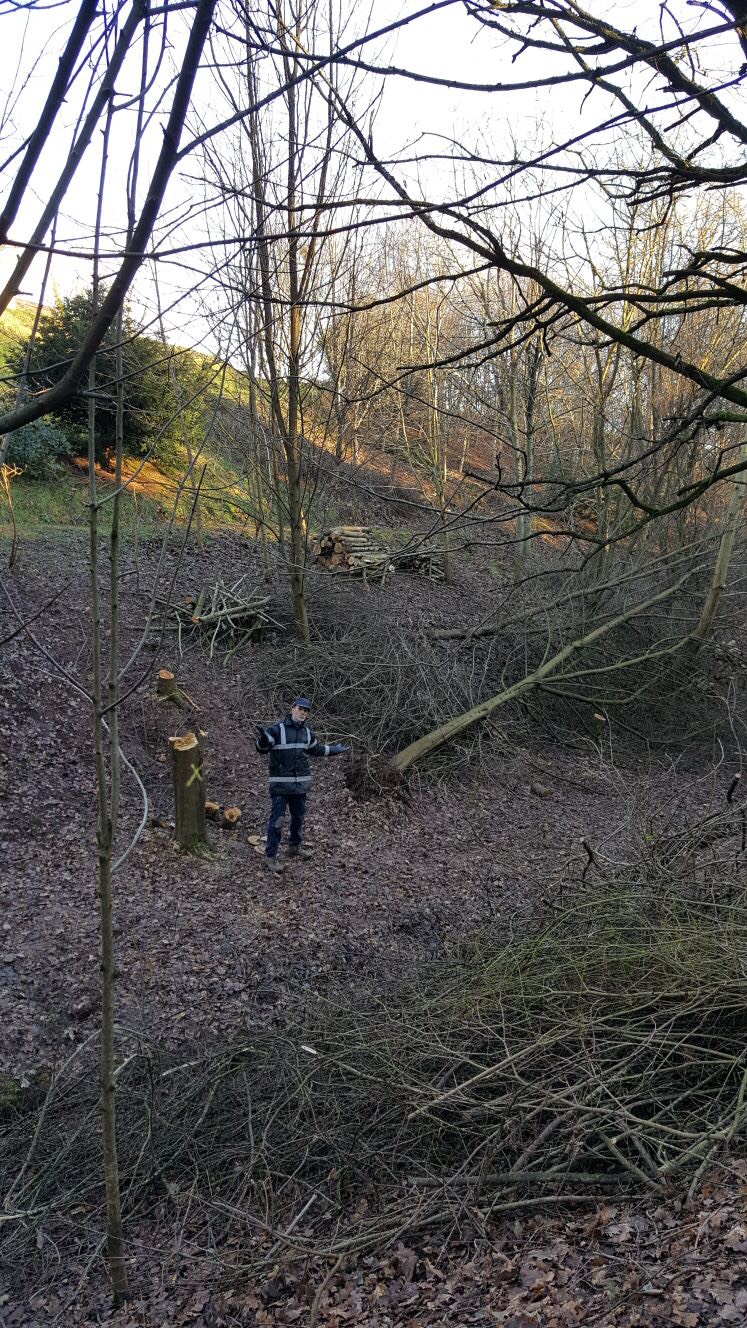 We’ve had an idea! We’ve shredded the brash and used the shreddings to create a path in the woodland. Genius! Now our vineyard visitors will be able to walk through the woodland, and admire the sights without getting stuck in the mud. And the goodness in the brash will gradually be returned to the soil. It took many days, and was very boring, but we’re very pleased with the result.

Flushed with the success of part 1, we decided to take advantage of slightly firmer ground following another very hard frost to use the tractor to take some of the poles and logs out of the woodland. Oh dear! All went well until the frost began to thaw, the earth turned to mud and the tractor got stuck for three days halfway up the valley. Lesson learned! We will now wait for a month or two before embarking on part 3. 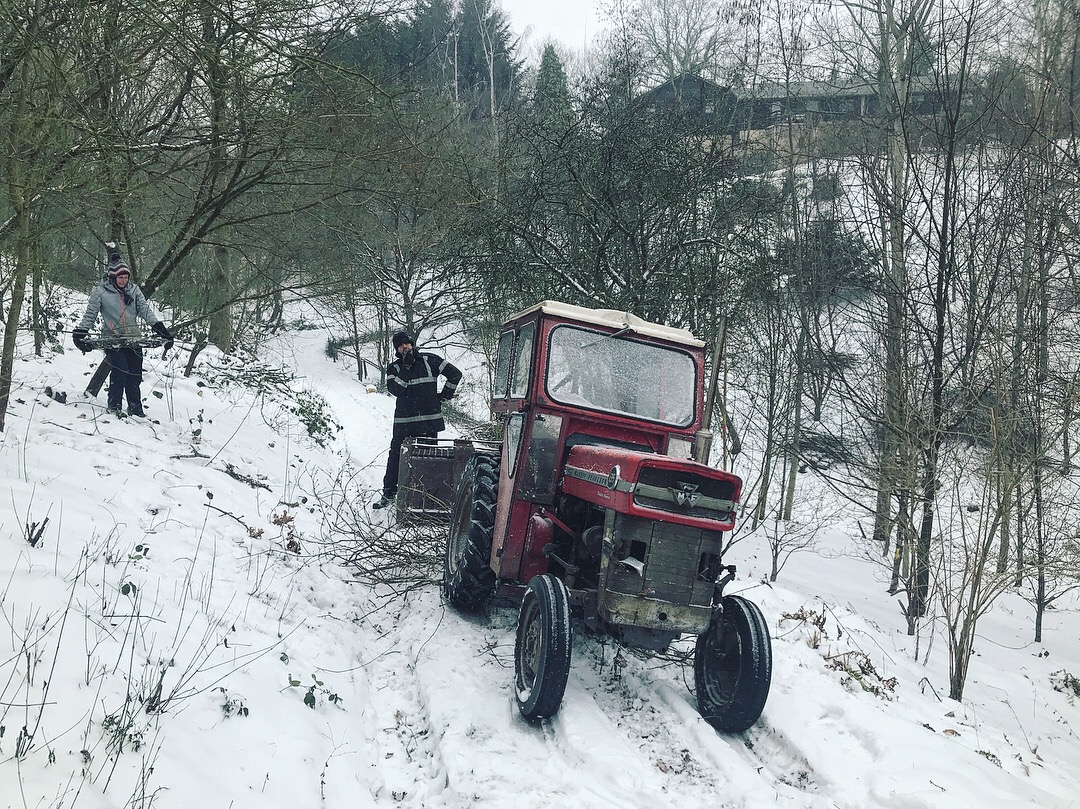 A group (or more accurately and poetically, a murder) of crows has moved into the oak trees at the top of the vineyard. Much noise, agitation, and general busy-ness. They’re not the most user-friendly bird, and have a bit of a poor reputation, but we think that there is something very evocative about their mass calling, cawing and croaking, especially towards the end of the day as they come home to roost. They’re a very welcome addition to our family.

We seem finally to have emerged from one of the longest, coldest, wettest winters in recent years. And the wildlife is wasting no time getting into “spring mode”. Most noticeably, Tarquin, our semi-tame pheasant. He is in full breeding plumage, his red cheeks are swollen to twice their normal size and are a vivid shade of scarlet. His other colours have also been turned up to 11, and he is now strutting around at his full height, plumping himself up and generally looking somewhere between magnificent and ridiculous. But his harem are loving it. Especially when he pretends that he’s the great food provider when we scatter the seeds for them all (3 times a day, at least!)

We saw a pile of feathers on the woodland path, went to see what had happened, and discovered a freshly killed pigeon. As it was almost dusk, we took the opportunity to put our new trail camera on a post overlooking the scene (what BBC’s Springwatch programme would probably have called “carcass-cam”). Left it overnight, then went back to review the footage. Oh my! First we saw our (often heard, but never-before-seen) tawny owl having a nibble. And then we saw the killer: a sparrowhawk who eventually flew off with the head! Great footage, but not a great day to be a pigeon!

The return of the Muntjacs

Last year we discovered that we had a small family of muntjac deer living with us. Funny-looking animals, natives of the Far East, they resemble big chubby dogs rather than Bambi. Well after a winter hiding away, they’re back. It’s lovely to see them grazing the lawn or the undergrowth in the woodland. Luckily they don’t venture up to the vineyard, where they could be destructive. We now just wait for the summer mating rituals involving incessant, monotonous, and very loud barking all through the night! But for now, they’re quiet and welcome...

Whilst we might love being in our woodland even in the most dreary, damp and cold of days, we accept its not everyone’s cup of tea. However, now the sun has finally made an appearance, and our woodland is looking less of a muddy timber workyard, we thought we’d invite some friends round to share in the magic of a springtime woodland. Daisy gave them the tour and then put them to work infilling our gappy hedgerows with some native species whips. We then rewarded ourselves with some foraged wild garlic pesto pasta, and enjoyed an evening of songs, stories and marshmallows around the campfire under the stars. It was a wonderful weekend, and it’s a big aspiration of ours to host more groups in the woodland in the future.